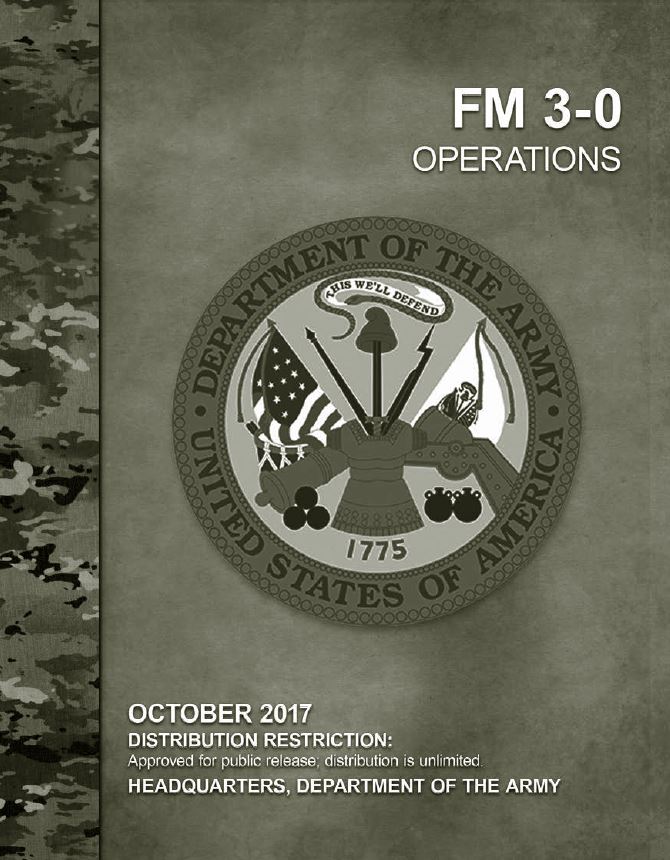 The Return of FM 3-0, Operations

Today's operational environment presents threats to the Army and joint force that are significantly more dangerous in terms of capability and magnitude than those we faced in Iraq and Afghanistan. Major regional powers like Russia, China, Iran, and North Korea are actively seeking to gain strategic positional advantage. These nations, and other adversaries, are fielding capabilities to deny long-held U.S. freedom of action in the air, land, maritime, space, and cyberspace domains and reduce U.S. influence in critical areas of the world. In some contexts they already have overmatch or parity, a challenge the joint force has not faced in twenty-five years.

The proliferation of advanced technologies; adversary emphasis on force training, modernization, and professionalization; the rise of revisionist, revanchist, and extremist ideologies; and the ever increasing speed of human interaction makes large-scale ground combat more lethal, and more likely, than it has been in a generation.

As the Army and the joint force focused on counter-insurgency and counter-terrorism at the expense of other capabilities, our adversaries watched, learned, adapted, modernized and devised strategies that put us at a position of relative disadvantage in places where we may be required to fight.

The Army and joint force must adapt and prepare for large-scale combat operations in highly contested, lethal environments where enemies employ potent long range fires and other capabilities that rival or surpass our own. The risk of inaction is great; the less prepared we are to meet these challenges, the greater the likelihood for conflict with those who seek windows of opportunity to exploit. The reduction of friendly, forward-stationed forces, significant reductions in capability and capacity across the entire joint force, and the pace of modernization make it imperative that we do everything possible to prepare for worst-case scenarios. We must be ready to win with the forces we have, and having the right doctrine is a critical part of that readiness.

FM 3-0, Operations, provides a doctrinal approach for our theater armies, corps, divisions and brigades to address the challenges of shaping operational environments, preventing conflict, prevailing during large-scale ground combat, and consolidating gains to follow through on tactical success. FM 3-0 is about how we deter adversaries and fight a peer threat today, with today's forces and today's capabilities. It addresses operations to counter threats in three broad contexts that account for what the Nation asks its Army to do. Two chapters describe operations to defeat aggression by subversion of U.S. partners and interests, which is fundamental to winning short of war. Three chapters describe operations to defeat enemies during large-scale ground combat operations, which is fundamental to winning wars. The final chapter describes operations to complete the tasks necessary to ensure enduring outcomes, which is fundamental to achieving the ultimate strategic purpose of employing Army forces.

This manual also provides the foundation for training and Army education system curricula and future capabilities development across doctrine, organization, training, material, leadership and education, personnel, and facilities (known as DOTMLPF). To comprehend the doctrine contained in FM 3-0, readers must first understand the fundamentals of unified land operations described in ADP 3-0 and ADRP 3-0. They must understand the language of tactics and the fundamentals of the offense and defense described in ADRP 3-90. However, doctrine is only one factor in how we fight. Of greater importance is our training and leader development. Building agile and adaptive leaders and units that can prevail in the relentlessly lethal environment of large-scale combat operations requires tough, realistic, and repetitive training. FM 3-0 provides the tactical and operational doctrine to drive our preparation, and when necessary, execution.