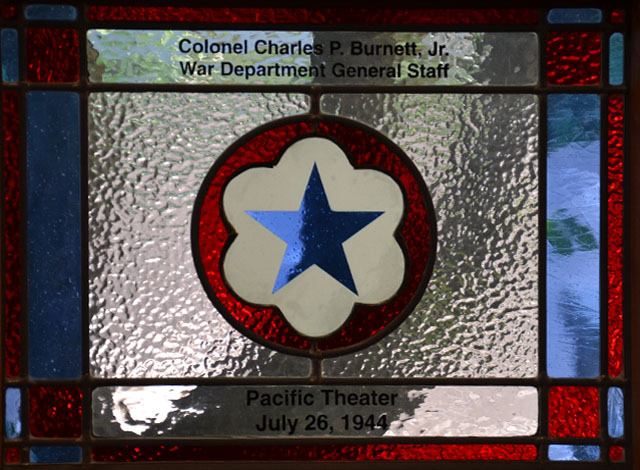 Colonel Charles P. Burnett, Jr. was declared missing in action on 26 July 1944. At the time of his disappearance, he was on a special mission in the Pacific area. The War Department later announced that he had been killed in an airplane accident.

Born in Seattle, Washington on August 14, 1904, he received his law degree from the University of Washington in 1927 and practiced law from 1927 until May 29, 1941, when he entered the Army on extended active duty.

Having previously been commissioned a captain in the Judge Advocate General Officer Reserve Corps, Burnett was promoted to major after having served six months in the Military Affairs Division, The Judge Advocate General's Office, Washington, D.C. During this time, then Major Burnett was on special duty in connection with Army operations of strike-bound plants and co-authored a confidential manual, Military Operation of Industrial Plants. This manual was subsequently adopted by the War Department for use in such work.

On September 19, 1942, he was promoted to lieutenant colonel and served as Chief of the Officers Branch, Military Affairs Division. In this assignment, he supervised the preparation of numerous directives and pamphlets dealing with the civil affairs and military government of occupied territories.

Burnett was promoted to colonel on February 25, 1944 and was assigned to the General Staff Corps at the time of his death.