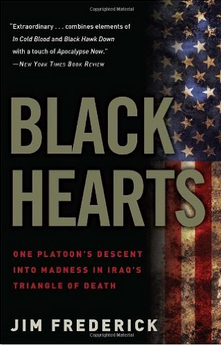 BLACK HEARTS: ONE PLATOON'S DESCENT INTO MADNESS IN IRAQ'S TRIANGLE OF DEATH

This is the story of a small group of soldiers from the 101st Airborne Division’s fabled 502nd Infantry Regiment—a unit known as “the Black Heart Brigade.” Deployed in late 2005 to Iraq’s so-called Triangle of Death, a veritable meat grinder just south of Baghdad, the Black Hearts found themselves in arguably the country’s most dangerous location at its most dangerous time.

Hit by near-daily mortars, gunfire, and roadside bomb attacks, suffering from a particularly heavy death toll, and enduring a chronic breakdown in leadership, members of one Black Heart platoon—1st Platoon, Bravo Company, 1st Battalion—descended, over their year-long tour of duty, into a tailspin of poor discipline, substance abuse, and brutality.