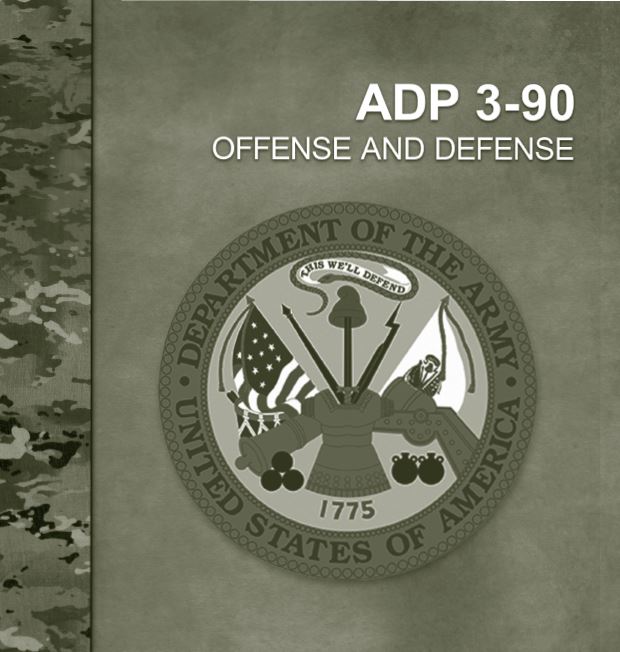 ADP 3-90: Tactics is the employment and ordered arrangement of forces in relation to each other (CJCSI 5120.01A). Through tactics, commanders employ combat power to accomplish their missions. Tactical-level commanders apply combat power in battles, engagements, and small-unit actions. This ADP captures the nature of the operational environment as described by FM 3-0, Operations, and aligns offensive and defensive doctrine to those conditions. ADP 3-90 is the introductory reference for all Army students of tactical art and science. The five chapters of ADP 3-90 focus on the tactics used to employ available means to prevail during large-scale ground combat (in the offense and the defense) and constitute the Army's collective view of how it conducts prompt and sustained tactical offensive and defensive tasks on land. All tactics require judgment in application. This publication is not prescriptive, but it is authoritative. ADP 3-90 standardizes the lexicon commanders' use to describe the conduct of offensive, defensive, and supporting tactical enabling tasks. It focuses on the employment of combined arms in combat operations.

ADP 7-0: The purpose of ADP 7-0 is to provide the Army the framework leaders follow to effectively ready Soldiers and units to execute unified land operations. Readiness is the Army's number one priority, and training represents the most important activity units do every day to achieve readiness. The Army does this by conducting tough, realistic, standards-based, performance-oriented training. ADP 7-0 is founded on the concept that training management is a logical extension of the Army's operations process. The ideas and concepts of planning, preparing, executing, and assessing operations is fundamentally the same whether the unit trains to achieve readiness at home station or trains to operate when deployed. Learning and applying the concepts, ideas, and terminology of the operations process as units train makes the transition from training to operations more seamless for both leaders and their units-and improves the overall readiness of the force. Units train all the time-while deployed, at home station, and at combat training centers. Through effective, battle-focused training, units, leaders, and Soldiers achieve the tactical and technical competence that builds confidence, adaptability, and effectiveness. Army forces train using proven training doctrine that sustains their operational capabilities. The Army trains units, Soldiers, and Army Civilians to achieve proficiency in individual and collective tasks under challenging and realistic conditions. Training continues in deployed units to sustain skills and adapt to continual changes in an operational environment. During the entire training process, leaders provide candid and objective evaluations, assessments, after action reviews, and applied lessons learned. This approach produces versatile units, quality Soldiers, and Army Civilians ready to conduct operations. Readiness is the Army's top priority. Training is the most important activity units do to achieve and maintain readiness. ADP 7-0 establishes the principles and concepts of training and introduces the training procedures further expanded upon in FM 7-0.

FM 2-0: FM 2-0 represents an important step toward changing the Army culture and improving Army readiness by addressing the fundamentals and tactics associated with intelligence during large-scale combat operations. This publication describes the role of the commander and staff in intelligence, intelligence staff activities, and how military intelligence (MI) units conduct intelligence operations as part of information collection across the Army's strategic roles. FM 2-0 also contains the descriptions of the Army tactical tasks included in the intelligence warfighting function, doctrine on force projection, and doctrine on language support.