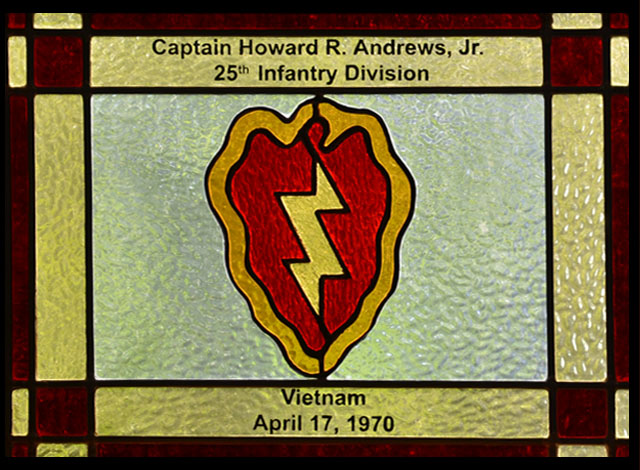 CPT Howard R. Andrews, Jr., was killed when the UH-1H in which he was a passenger struck a wire and crashed into the Saigon River near Bien Hoa, Vietnam, on April 17, 1970. Andrews, who was then serving as a trial defense counsel, had just left a counseling session with clients at the Long Binh confinement facility and was returning to the 25th Infantry Division at Cu Chi. Andrews was the only judge advocate killed in Vietnam.

“Howie” Andrews was born in Augusta, Georgia on September 3, 1942, the only child of Mr. and Mrs. Howard R. Andrews. When Howie was 13 years old, his father, who was a civil service employee with the U.S. Army, transferred to the U.S. Army Missile Command, Huntsville, AL.

Howie graduated from Georgia Tech University in 1965 (B.S., electrical engineering) and the University of Alabama School of Law in 1968. Just prior to graduating from law school, he enlisted in the Army but delayed his entry onto active duty until he finished his law degree and passed the Alabama Bar.

In early 1969, Howie reported for duty and attended basic and advanced individual training at Fort Leonard Wood, Missouri. Then Private First Class Andrews served as an artilleryman with the 101st Airborne Division in Vietnam.

While in Vietnam with the “Screaming Eagles,” Andrews worked as a legal clerk and then decided to apply for a commission in The Judge Advocate General’s Corps. Enlisted soldiers typically asked for a transfer to another unit when they obtained a commission. When Howie’s commission came through from the JAG Corps, he asked to move to the 25th Infantry Division because he knew the Staff Judge Advocate, LTC Fred Bright.

Today, the University of Alabama honors CPT Howard R. Andrews’ short but courageous career in the Army with a scholarship that is awarded annually to a deserving law student.