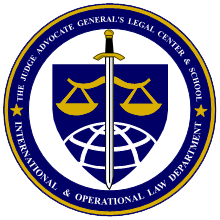 The National Security Law Department (ADN) educates and trains U.S. and foreign judge advocates in international law and the application of that law to military operations. Subjects taught include foundational international law topics such as jus ad bellum, Geneva Conventions, human rights, war crimes, and the national security structure, as well as more practical applications of international law such as means and methods of warfare, detention law, cyber law, intelligence law, and rules of engagement. ADN faculty members are primarily Army judge advocates, but also include judge advocates from the Marine Corps, Air Force, and Navy.

Scope: This course provides a basic understanding of the legal framework in which the intelligence community operates and the historical context with which to view, understand, and apply existing laws, regulations, and policies.  Focusing on judge advocates new to this area of the law, working at the joint task force (JTF) level and below, it presents current intelligence issues including intelligence operations in cyberspace, and tactical intelligence law issues that arise in a combat zone.

Prerequisites: Military or civilian attorneys employed by the U.S. Government who provide operational law advice to commanders.  Attendance is also open, on a limited basis, to U.S. Government employees assigned or pending assignment to positions requiring an understanding of intelligence law as it relates to the investigation of national security cases.  Attendance is by invitation only.  Potential applicants are invited to contact the International and Operational Law Department at the Judge Advocate General’s Legal Center and School in order to receive a course application.  The course requires a SECRET security clearance, confirmation of which must be received before the course begins.  Security clearances must be confirmed in writing by the sending unit’s security manager.

4.5 Days. Offered Once Annually. Next Offering: January 2020.
Offered by the International and Operational Law Department and the Center for Law and Military Operations (CLAMO)

Scope: This course provides military lawyers with a full understanding of the role of the Department of Defense in homeland security.  Although some instruction is provided in the area of homeland defense, the majority of the course focuses on the military’s support to civilian operations, such as domestic emergencies, civil disturbances, disaster relief, and law enforcement.  The course will cover the constitutional, statutory, and regulatory bases for military support provided to civilian authorities.  Other topics will include crisis management, interagency coordination efforts at the federal and state levels, information operations, and the use of force in domestic operations.

Prerequisites:  This course is open to military or civilian attorneys employed by the U.S. Government and Department of Defense paralegals serving in or pending assignment to a position that requires knowledge of international or operational law.  This course requires a SECRET security clearance, confirmation of which must be received by the School before the course begins.  Security clearances must be confirmed through JPAS or in writing by the sending unit’s security manager.
Previous attendance:  Individuals who have completed this course, the Judge Advocate Officer Basic Course (5-27-C20), or the Judge Advocate Officer Graduate Course (5-27-C22) within the preceding two years are not eligible to attend absent compelling circumstances (e.g., a pending deployment).  Students may request an exception from the Chair, National Security Law Department.

Scope: This course addresses emerging and/or emergent legal issues that are likely to confront Judge Advocates and other practitioners assigned to international and operational law billets.  The forum is intended to provide experienced practitioners from across the joint force, typically field grade or civilian equivalent, an in-depth exploration of current national security law issues.  The course provides TJAGLCS and the JAG Corps with operational flexibility to address new and changing topics in international and operational law.  Therefore, the focus of instruction for each course will change in accordance with evolving legal issues.   As such, the course description will be updated on a course-by-course basis in the Army Training Requirements and Resources System (ATRRS) in advance of each session.

Prerequisites: U.S. military attorneys, U.S. Government civilian attorneys, and Department of Defense paralegals serving in or pending assignment to a position that requires knowledge of the selected emergent international and operational legal issues.  Prior attendance at an OPLOAC Course (5F-F47) is preferred and the Judge Advocate Officer Graduate Course (5-27-C22) is preferred but not required.